“Push it to the limit” 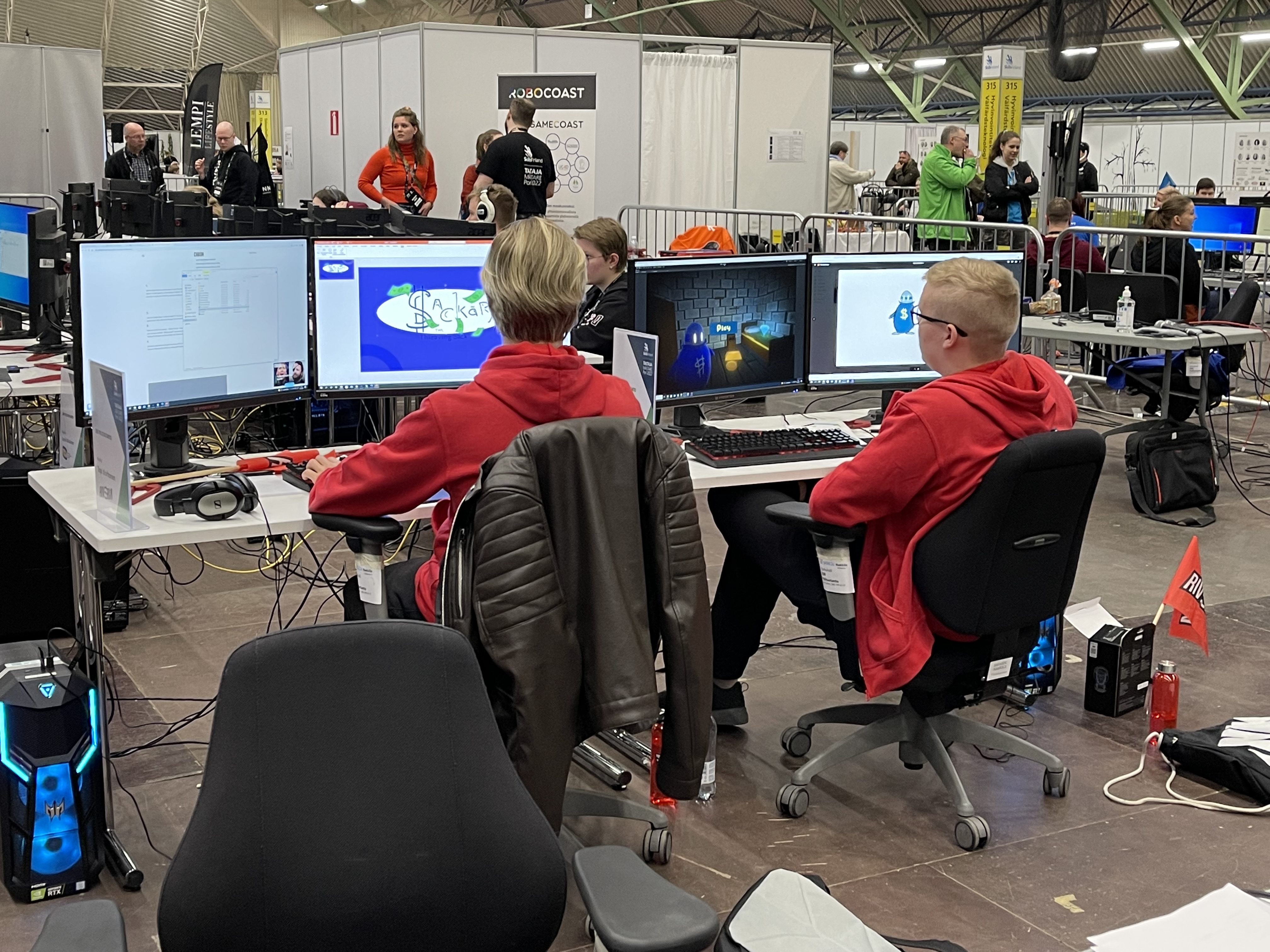 ”Push it to the limit”

The Taitaja2022 event, this year was held in Pori, which is the largest Finnish National Vocational Championships for secondary school students. The goal is to bring together the best professionals in Finland and compete for the best work samples. The 208 Game Production was one of the Skills categories, where the competitors had three days to create their games and gives a presentation on the secret theme. This year’s theme “Push it to the Limit” was revealed on the first day. The abstract theme made it possible to design a wide variety of game concepts.

The 208 Game Production category was organized by Sataedu Nakkila, with Jani Gröhn acting as the lead organizer. In total there were 14 competitors, forming seven competition pairs. The six teams used the Unity game engine, and one team decided to use the Unreal Engine 4. The teams got the task on the first day and had time from 8 hours of time to work on their tasks, including a lunch break.  On the second day, they continue their task and started implementing their PowerPoint of the game.

The final day was dedicated to the pitch presentations to the judging panel. The three expert judges were Pirita Ihamäki, the leader of the Gamecoast Network, Pyry Parkkola, Chief Unity Developer from Virtual Dawn, and Niko Ranta, Unity Developer from Virtual Dawn. The judging itself was no easy task, as the criteria were numerous and covered the mechanics of the games, the gameplay, the graphic design, the world of sound and the pitching during the game presentation, among others. The work of the judges began as teams left the competition arena.

For such a short time the quality of content was amazing. This kind of competition needs a lot of skills to create a solid plan and take it to the limits, notes Pyry Parkkola.

Taking two days to the limits

Topi Korhonen and Miko Kuokkanen, this year’s winning team from Riveria, said that making a game in two days is quite difficult, but possible. Topi Korhonen described the process as challenging, but also fun. Miko Kuokkanen agrees that the process was quite nice. The team considered three different game ideas, and the one they chose to implement was called Sackary the Stealisn Sack”.

Like Miko Kuokkanen describe in Sackary, the in-game character grows bigger whenever he steals gold, making it more difficult to get past the guards and complete the level successfully. If the player becomes greedy, the character’s pace slows down and the levels also get harder. This is an example of taking the boundaries to their extremes, challenging the player to find the optimal level of risk.

The team is considering commercializing the game, developing it further, and putting it on Steam and itch.io as well.

As a judge, Pirita Ihamäki described that the team’s performance was impressive by the fact that the team was the only one to bring out the commercial side as well.”

Games are not only developed for fun, but they can be valuable products. Finland is one of the three biggest game developer countries in Europe with a turnover of €2,36 Bn in 2017, a third consecutive year when the turnover of the industry surpassed €2 Bn. The world is looking at Finland when seeking the newest trends in the field of gaming. The Finnish game industry combines creativeness with the best technical talent and continuously produces new titles. We already have a vibrant community of active and welcoming game developers, and this is only the beginning.

This year the talent was exceptional, I was deeply impressed by the level of competition. The margins between first and second place were razor thin, and every team had a chance at victory. The teacher coaches were also rightly proud of their students, and the general atmosphere was great! I believe this competition represented the very highest quality of Finnish game dev education at the vocational level.”, exclaimed Jani Gröhn, lead organizer of the Game Production competition.